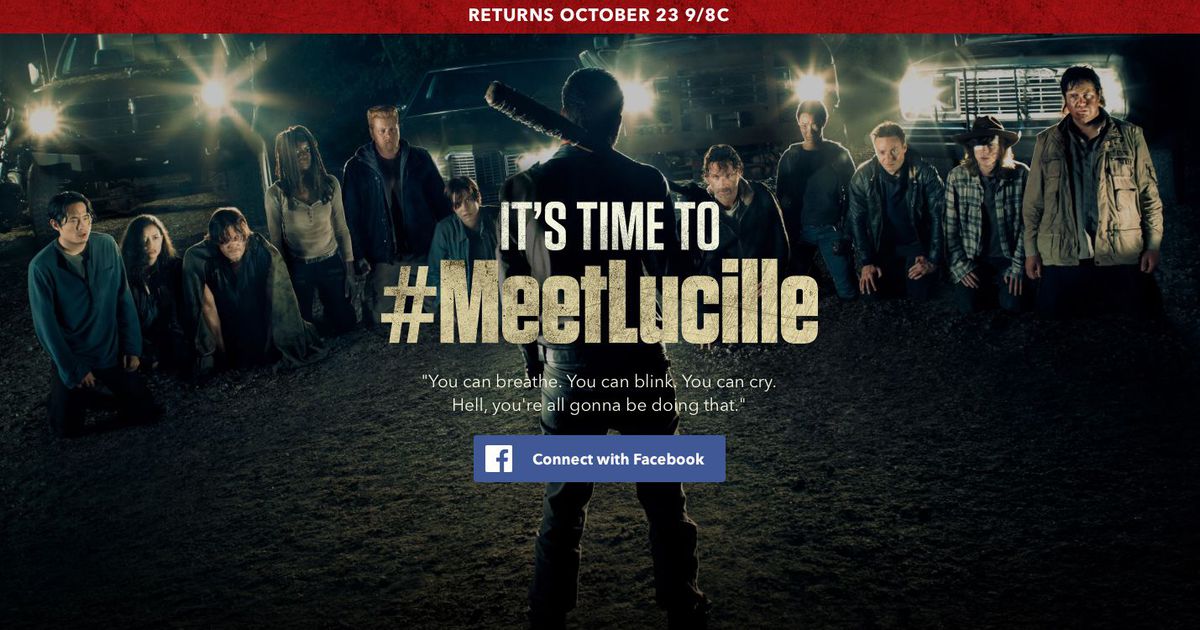 Fans of The Walking Dead have been obsessing about the identity of Negan’s victim for the past six months, and on Sunday, Oct. 23, we’ll finally learn who got a face-to-face introduction to Lucille when the Season 7 premiere debuts on AMC.

In the meantime, Mashable has learned exclusively, brave viewers can put themselves into the unenviable position that Rick and his group have found themselves in, thanks to a new partnership between AMC and Facebook. Daring souls can visit MeetLucille.com and, by connecting their Facebook account to the site, play a harrowing game of eeny meeny miny moe with Negan himself. (And, to ease the trauma, enter to win tickets to the premiere taping of Talking Dead.)

Digital marketing agency 360i worked with AMC to bring the chilling activation to life, and according to Linda Schupack, head of marketing for AMC and SundanceTV, it was a no-brainer (pun intended) after the last scene in the Season 6 finale, which saw Negan savagely beating one of our heroes to death: “We knew that that was the scene that people would want to engage with, and we wanted to give people a way to experience it,” she says.

Facebook proved to be an ideal partner because it offered a more personal element for fans, Schupack explains. “It really allowed us to go beyond the sheer conversation that these fans were having around The Walking Dead and let the audience enter into this world and engage with it by pulling in their community to experience that final scene,” she says. “The power of the show has always been ‘what would I do, how would I feel,’ so people are engaging with that show in that way in general, and this gives them a particular way to take it even further.”

From Schupack’s perspective, it’s illustrative of the evolution of social media and the role it plays in promoting a series which has become as much about expanding the world of a show as about driving discussion around it.

“All of these platforms are particularly exciting for us as marketers to think about how we can broaden and deepen the relationship between fans and the property,” Schupack notes. “The opportunity to use these tools in new and exciting and entertaining ways to deepen fan engagement takes us beyond the conversation notion of social media and lets us bring people into the emotional experience.”

The Walking Dead Season 7 premieres Sunday, Oct. 23 at 9 p.m. ET on AMC, and the network is airing a two-hour primer on the journey of the show so far beginning at 9 p.m. on Oct. 16.