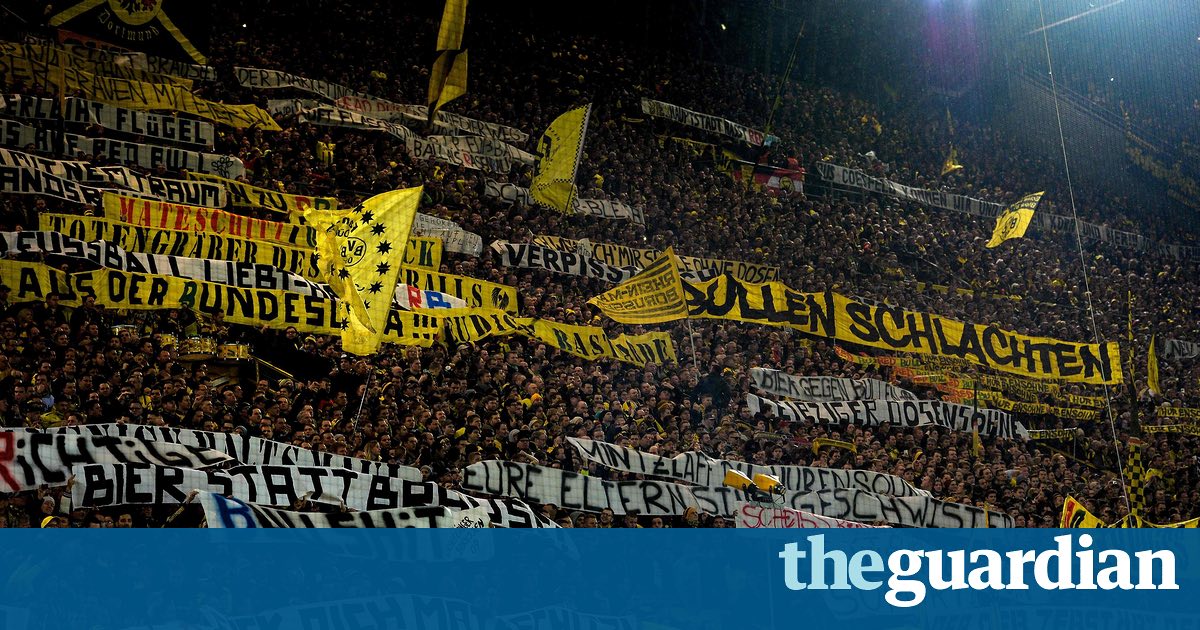 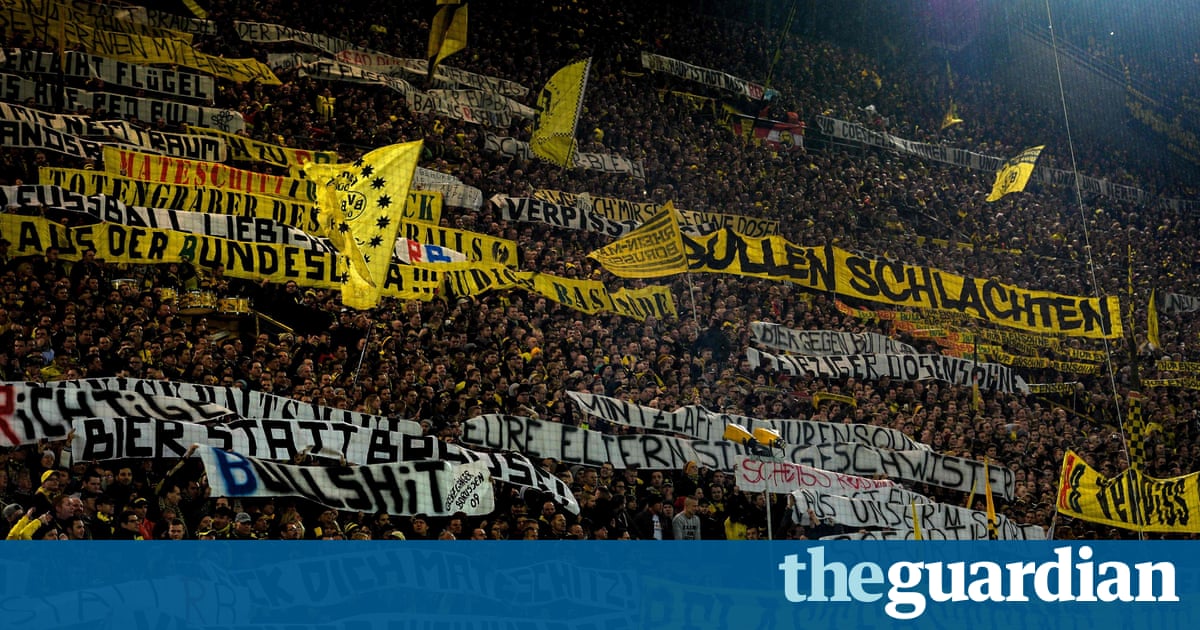 Die Gelbe Wand, the famous yellow wall, is never less than vocal but on Saturday it spoke loudest without the aid of air or lungs. As their Borussia Dortmund prepared to kick off the Bundesligas game of the weekend, against RB Leipzig, the banners came out some big, some small, maybe 100 of them, maybe more. The strength of feeling that habitually emanates from Europes biggest standing terrace is well known, but this was something else.

They all shared similar messages. Bullen Schweine, Red Bull Feind des Fussballs! (footballs enemy), and even a few in English such as Beer is a passion, RB is a fashion were among the politer banners. That there was such animosity was no great surprise. The high-flying newcomers have attracted protests against their unashamedly corporate governance everywhere theyve been this season, but few have been as emphatic in their condemnation of the Red Bull model than Dortmund.

Septembers first encounter between the two in Leipzig was preceded by some prominent Dortmund supporter groups declining their ticket allocation for the match, although the 4,000-plus allowance was snapped up eagerly by local BVB fans. CEO Hans-Joachim Watzke dismissed RB Leipzig as being founded just to sell cans of soda.

What was a little more surprising was the sheer extent of some of the hatred displayed in the immediate buildup to the game. Outside Signal Iduna Park, hours before kick-off, ultras had attached their small banner to a fence, advising the visitors der Fussball gehrt uns football belongs to us. Some 20 ultras stood by it, hurling insults at any Leipzig fans that went past, including children.

Elsewhere it was worse, with groups of Leipzig fans pelted with cans and stones and, according to eyewitness reports, many had beer thrown at them or were spat on. Pepper spray was used to restore order in some areas, with fans of both sides telling this column that they had been caught in the middle of it. Local police later released a statement detailing how they had charged 28 with offences including assault and damage to property. Four police were among those who sustained (thankfully minor, it seems) injuries.

RB Leipzig released a statement condemning the attacks on Sunday, quickly followed by an official statement from Dortmund, signed by Watzke and president Dr Reinhard Rauball, which strongly condemns the attacks. To make things crystal clear, it concluded, whoever expresses their opinion through means of violence and insults as opposed to arguments, can, and will not be a part of the BVB family.

The German FA (DFB) have already announced the opening of an investigation into the incidents, though the German Press Agency suggests that it will focus mainly on the raft of banners in the Sdtribne, rather than the unpleasantness outside the stadium, which is broadly considered to be outside the clubs jurisdiction.

All in all, it was hard to believe that this was a meeting between one of the Bundesligas leading lights and what remains a newly-promoted club. Away from the idiocy of the minority, the intensity created a formidable atmosphere in an 81,000 sell-out, with some locals even suggesting that the ambience was the most intense here this season, which is saying something when one considers Bayern Munich and local rivals Schalke have already visited.

It was something, perhaps, that Dortmund needed to shake themselves out of a slumber that the winter break doesnt seem to have fully woken them from, despite taking four points in the two games of 2017 leading into this. It was very loud from the crowd today, the goalkeeper Roman Brki told The Guardian after the game, and it was good for us. It pushed us.

A depleted Leipzig began the game with a greater level of control but BVB, for all their possession, gradually figured out that the ball over the top was the best and simplest way to beat the visitors high press. They had already taken a grip of the game when the excellent Ousmane Dembl latched on to one such delivery forward to steam down the right and offer Pierre-Emerick Aubameyang a simple opportunity to head the winner. Thomas Tuchel, under scrutiny in recent days, even allowed himself a brief jig on the pitch when the ball hit the net.

Despite Tuchels summing-up of the game as a 4-0 disguised as a 1-0, justifiable after his side (and Marco Reus in particular) spurned of chances to finish it off, Leipzig were defiant, in the image of their 8,000 travelling supporters, who chanted loudly throughout. They took the field minus the influential Emil Forsberg, still serving a ban, while Timo Werner and Diego Demme were among the victims after a wave of flu swept through the squad during the week, even briefly keeping the coach Ralph Hasenhttl away from training. The substitute Federico Palacios-Martnez thought he had scored a last-gasp equaliser but was ruled (correctly, if only just) offside.