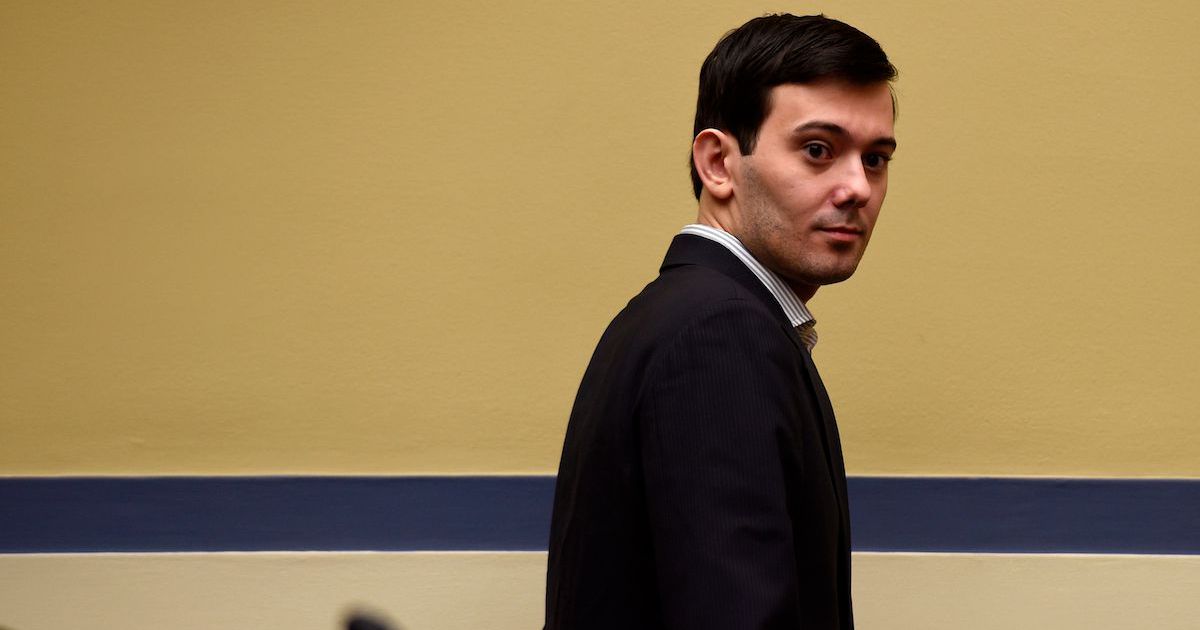 UPDATED (4:19 p.m. ET): Updated with additional comment from Shkreli with regards to the substance thrown at him.

A scheduled joint appearance by nefarious pharma bro Martin Shkreli and Breitbart writer Milo Yiannopoulos went sideways on Friday due to protests, during which Shkreli was hit in the face by something thrown by a protester.

The event, promoted using the hashtag “#SHKRELOPOULOS,” was canceled on Friday evening by its organizers, the Davis College Republicans, after protesters blocked access to the venue on the UC Davis campus, according to a statement from the college.

The tour returns this Friday the 13th, with guest star Martin Shkreli. A killer night ahead of us, UC Davis…

There was only one arrest, according to the college, though there were plenty of clashes and heated exchanges between protesters and supporters of the two men (both of whom have been suspended from Twitter for violating the site’s harassment terms).

Heat between the two sides had been simmering for days before the event, punctuated by an editorial denouncing the event in the school’s paper and a petition being circled among students at the school. The school’s interim chancellor, Ralph Hexter, said in a statement that the campus would allow the event to go forward to foster “an environment that avoids censorship and allows space for differing points of view.”

READ  Think Trumps Policies On Israel-Palestine Have Nothing To Do With You? Think Again
Powered by Inline Related Posts

And it all came to a head when someone flung a substance at Shkreli on Friday, hitting him in the face.

in which martin shkreli gets poop thrown at his face pic.twitter.com/lBLljnMuep

Originally reported to be dog poop, Shrkeli denied that, telling Mashable in an email, “There was no poop thrown, unfortunately. This is what they call ‘fake news’. There was something thrownmy security determined it to be leaves, which I brushed off. The lack of smell, stain or other obvious findings eliminates the possibility.”

As for Yiannopoulos, in a post on his Facebook page, he denounced the decision to cancel the event, saying:

Left-wing thugs scared UC Davis into canceling my event last night by damaging property, hurling excrement at guests and starting fights. It was the university and campus PD who told us the event could not go ahead.

Yiannopoulos also appeared on campus on Saturday with a smaller group of supporters, continuing to criticize the college for canceling his event.

Yiannopoulus was banned from Twitter in July 2016 after an incident stemming from his takedown of the Ghostbusters reboot on Breitbart. It specifically targeted actress Leslie Jones, which led to many of his followers bombarding Jones with vicious, racist harassment. The actress briefly left Twitter during that time, citing that harassment.

The Breitbart writer also recently signed a six-figure book deal with Simon & Schuster, eliciting backlash from critics and other writers signed to the publishing company.

As for Shkreli, he was suspended for harassing Teen Vogue editor Lauren Duca after adding several photoshopped images involving he and Duca to his account. According to Twiitter, Shkreli can appeal his suspension and have his account reinstated, so long as he makes necessary changes, including dropping the Photoshopped image of Shkreli and Duca cuddling on a couch.

BONUS: 12 cringe-worthy YouTube comments that only a troll could love