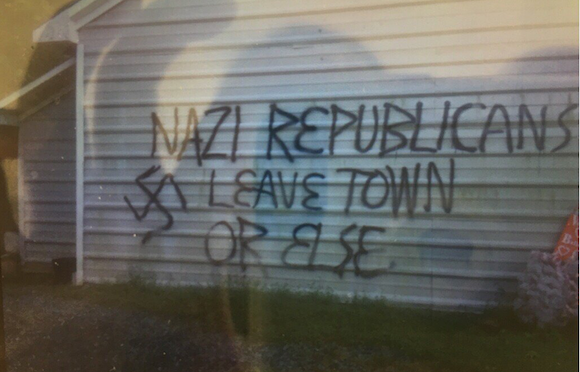 This is truly terrifying, and just another show of how out of control this election season has become.

The Orange County Republican Party headquarters in Hillsborough, North Carolina were firebombed sometime over night on Saturday evening, and GOP officials are already calling it an act of “political terrorism,” according to reports.

Hillsborough police say the incident happened when a bottle of flammable liquid was thrown through the front window of the headquarters, and quickly caught fire with the furniture and other property inside.

Furthermore, the words “Nazi Republicans leave town or else” were spray painted on the side of an adjacent building.

Hillsborough Mayor Tom Stevens said in a statement about the incident:

Politicians from the other side of the aisle were quick to criticize the bombing, too, with N.C. Democratic party chair Patsy Keever saying:

“The North Carolina Democratic Party strongly condemns this attack. Violence has no place in our political system. We hope the perpetrators of this attack are brought to swift justice, and we are thankful that no one was hurt. Our deepest sympathies are with everyone at the North Carolina Republican Party.”

And just moments ago, Hillary Clinton tweeted about it, too (below):

The attack on the Orange County HQ @NCGOP office is horrific and unacceptable. Very grateful that everyone is safe.
Hillary Clinton (@HillaryClinton) October 16, 2016

Such a scary, sad state of affairs this election has brought out.