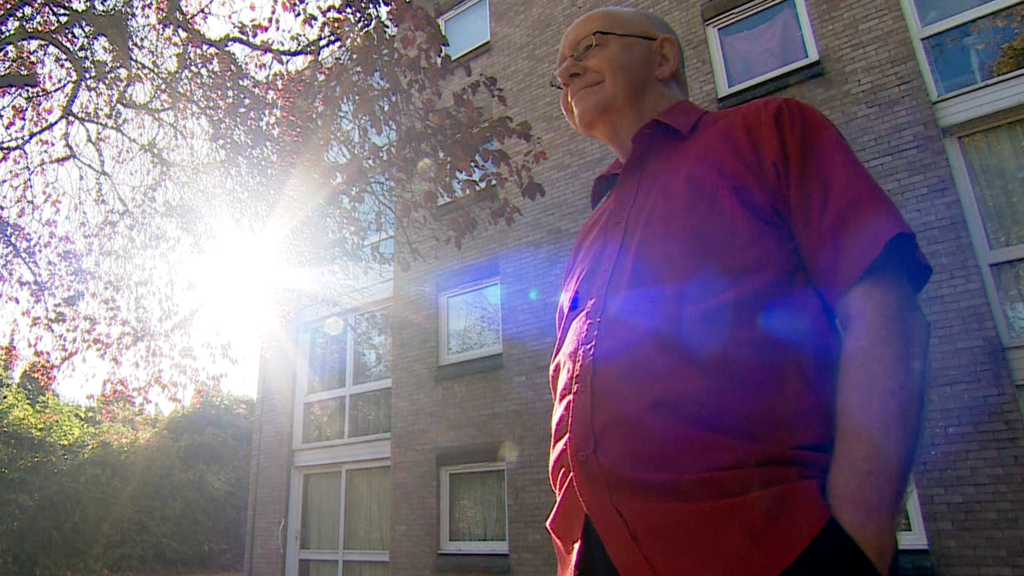 “We’ve basically never had a family home. We’ve never been anywhere where we could actually put our stamp on.”

Emma Percy, 34, lives in a three-bedroom house in Folkestone, Kent, with her husband and their three children.

They have moved 10 times in the past 12 years, because of short contracts, rent increases and bad conditions of the rental properties.

“She’ll say things like, ‘This is a house, it’s not my home,’ because we could just be somewhere else in six months’ time. That is a horrible thing to hear her say.

“As a mother, all you want for your kids is to have a roof over their heads, somewhere that’s clean, warm and a bed, and somewhere they can call their own. When you can’t provide that, it’s really hard.”

According to a survey conducted by ComRes for the BBC’s Victoria Derbyshire programme, 76% of people want the government to regulate parts of the private rental sector.

The survey of 1,002 people asked whether they would support government regulation on such issues as letting agents fees, contract lengths, deposits and inventory checks.

And more than two-thirds said they would support caps on rent increases when contracts were renewed.

The survey also suggests 63% of people want the government to extend the standard minimum letting period from six months to 12.

A recent BBC investigation found people across large parts of England spent more than a third of their disposable income on rent.

The rent for the Percy family’s current house is 750 a month. Half of their annual family income – 24,000 plus tax credits – goes on rent and council tax.

Mrs Percy says that as children grow up, their parents’ house is seen as their family home, somewhere for them to return to “and cry when you split up with your boyfriend”.

“You’ve got all those memories there. But now, where you’re in and out [of] homes after about a year, you never get the chance to build those memories,” she says.

Trevor Locke, 68, lives in a one-bedroom flat in Leicester. He pays 450 a month, and gets about 700 a month from his state pension. He also receives 250 a month housing benefit.

He previously lived in a privately rented home for five years, before being asked to leave when the landlord wanted to sell the property. He was given 28 days’ notice.

“I actually didn’t see that coming. I had no idea that I might have to move,” he says.

“I was very settled, it was my home, it gave me everything that I wanted, and then all of a sudden I got a notice saying that I had to move out.

“And I had about a month to find somewhere else.”

His biggest problem was finding the money for the move.

“By the time you’ve put down the deposit, rent in advance, agents’ fees, all the other costs, let alone the actual move itself, you’re talking about somewhere between 2,500 and 3,500,” he says.

“I budgeted about 4,000, and I don’t have that kind of money in a sock under the bed, so I had to go around and try and find a couple of thousand pounds, just so I could move.

“I’ve got all my possessions, things I’ve collected over a period of time. You have to move all that, it’s not like I can just up and go. I was absolutely devastated.”

Vicky Spratt, 28, estimates she has spent close to 5,000 over the past decade on moving costs.

She has had to move eight times in the past 10 years, for similar reasons to the Percy family.

Ms Spratt spends two-thirds of her monthly pay on rent for the one-bedroom flat in east London she shares with her boyfriend, who also pays the same proportion out of his wages.

She says: “When I moved into this flat, it cost me, just in letting agency fees alone, over 500.

“By the time you’ve factored in hiring a van to move, I think that was 400, and buying extra bits of furniture, which we needed, that was probably about another 1,000.

“If your home is not secure, how is the rest of your life supposed to function?

“With short-term tenancies, landlords being able to hike up rent and people having to move a lot because of costs going up, there isn’t enough security.

“There needs to be more control of costs.”

But Alan Ward, chairman of the Residential Landlords Association, says that while the idea of rent controls may seem “attractive”, they would be a “disaster”.

“All experience of them shows that they lead to landlords cutting investment or quitting the market, reducing both quality and choice for tenants. The way to moderate rents is to encourage investment and boost supply,” he said.

“There are already well over 400 regulations affecting the private rented sector, and the actions of successive governments is raising the cost of renting.

“The problem is not about a lack of regulations but proper enforcement of them, and we support local authorities in their efforts to root out criminal landlords.”

A spokesman for the Department of Communities and Local Government said: “This government is committed to creating a bigger, better private rented sector, with up to 10bn in government-backed guarantees to build more quality homes for rent.

“We are doing this without the need for excessive state regulation that would push up prices and make it far harder for people to find somewhere to rent.”

The BBC’s Victoria Derbyshire programme is broadcast on weekdays between 09:00 and 11:00 on BBC Two and the BBC News Channel.