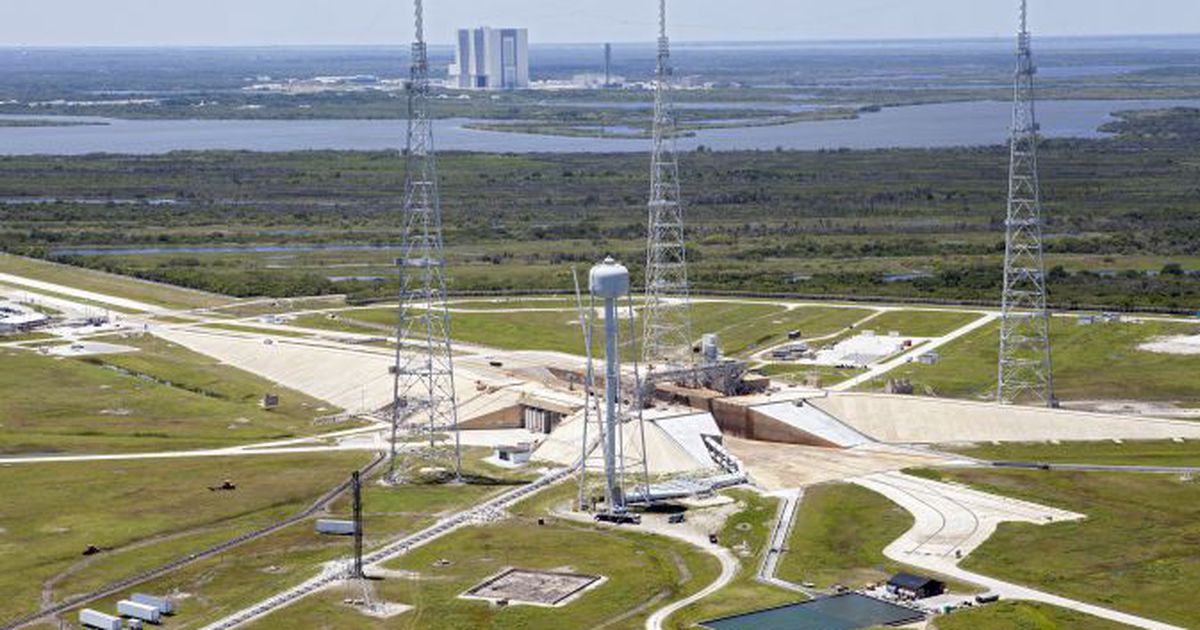 Launch Pad 39B, like much of the Kennedy Space Center, is vulnerable to the effects of a hurricane.

As of Thursday afternoon local time, things were not looking good for the Space Coast. The region of eastern Florida that plays host to the Kennedy Space Center and Cape Canaveral Air Force Station, was looking set for a direct hit from Hurricane Matthew with all its Category 4 strength.

The National Hurricane Center (NHC) said Thursday afternoon that Hurricane Matthew, which has wreaked havoc in Haiti, eastern Cuba and battered the Bahamas, could cause “potentially disastrous impacts for Florida.”

Neither the iconic NASA facility nor the nearby air force station, along with Patrick Air Force Base, have ever been tested in a storm of this magnitude before.

The NHC predicted heavy rain, 7 to 11 feet of storm surge flooding above high tide level and 140-mile-per-hour winds as the eye of the storm potentially moves “close to or over the east coast of the Florida peninsula through Friday night.”

It entered HURCON II (or Hurricane Condition II) on Wednesday. All “non-mission essential personnel” were released at 11 a.m. and “a mandatory evacuation for personnel and residents on barrier islands, in manufactured homes and in slosh zones” began at 3 p.m.

The Kennedy Space Center Visitor Complex, meanwhile, was completely closed Thursday and Friday and “anticipated to reopen” Saturday. By Thursday the center was in HURCON I status, the last stage before the hurricane hits, with final checks for loose debris being made.

A Facebook update from the Kennedy Space Center Thursday afternoon warned of gusts to 150 mph.

All eyes will be on Matthew over the coming hours. If it tracks slightly further out to sea, the potential for damage could lessen. If it continues swinging straight for the Space Coast, the cost could be catastrophic. And if it hits during a high tide, surge-related flooding could make things even worse.

The NHC is warning of storm inundation as high as 9 feet or more above normally dry land all the way up the neighboring section of coast, and of “life-threatening inundation” along the Florida east coast. Most of the Kennedy Space Center is built on land between five and ten feet above sea level.

Cape Canaveral is one of NASA’s most valuable assets. It has sent dozens of rockets into space since the mid-1960s and from 2007 it’s also played host to SpaceX and the company’s series of Falcon 9 launches and booster rocket landings.

However, it’s built on spectacularly precarious ground. About a quarter of a mile from the Atlantic and surrounded by marshes, its a sitting duck for surges and is increasingly at risk as sea levels rise due to global warming.

While the two launch pads sit on artificial hills some fifty feet above sea level, many of the buildings are much lower. It’s also ensconced in a wildlife reserve so storm and sea level rise adaptation options are limited.

The site’s coastal location makes sense in terms of launch safety, since the rockets travel over water, but that oceanfront real estate comes at a cost.

“The buildings… have never been tested in a real world scenario”

The buildings, too, were not designed for winds of these speeds and have never been tested in a real world scenario. Many of the structures on the complex are only designed to withstand gusts of 125 mph, or sustained winds of 110 – 114 mph.

The Orbiter Processing Facility is only built for gusts of 105 mph, for example, and the Payload Hazard and Servicing Facility cannot withstand sustained gusts over 110 mph. The launchpads only hold up until around 114 mph.

Facilities built after Hurricane Andrew in 1992 have been constructed to the revised hurricane engineering standard of 130 – 135 mph, NASA says. Even so, none of them have ever faced the test they face now.

In fact, no hurricane of Category 3 or greater intensity has ever hit Cape Canaveral like Hurricane Matthew is forecast to do, even if the eye misses the facility by 10 to 20 miles.

Combine those two weaknesses insufficiently prepared infrastructure and a vulnerable location in the face of Matthew and the prospects for the facility during this storm are troubling.

Matthew could be the strongest hurricane to make a direct hit since the 1880s, John Nielsen-Gammon, professor of atmospheric sciences at Texas A&M University, told Mashable.

Buildings in hurricane-prone, coastal areas of Florida are not generally built to withstand a storm above a Category 3, he said.

Once you get much above that intensity, events are unlikely enough to happen that buildings arent built to deal with them.

In any given year, there’s about a 1 percent chance of a Category 4 storm hitting Florida, so “common design standards” don’t usually aim to address that unlikely eventuality.

This storm is pushing that envelope, he said.

The Space Coast has been hit by severe weather before, which offers some clues as to what could happen with this storm.

Hurricane Sandy caused serious coastal erosion when it passed about 200 miles offshore in 2012, taking out 100 feet off the beach between the two launchpads and costing millions of dollars in shoreline repair work. NASA had to spend some $3 million to rebuild a protective dune.

Hurricane Frances, meanwhile, struck around 100 miles south of Cape Canaveral in 2004, and the 60-mile-per-hour winds at the facility knocked over rockets and ripped panels from the Vehicle Assembly Building. It was one of four hurricanes that hit the region that year alone.

Hurricane Frances caused more than $100 million in property damage to space and military facilities in the Cape Canaveral area, according to a report from the National Oceanic and Atmospheric Administration (NOAA).

Hurricane Matthew could hit closer and far harder than Frances or any other weather event to strike the region. Quite simply: the buildings and infrastructure that make up the Space Coast have never been tested in winds this strong before.

A hurricane ride-out team of some 116 people is set to report significant events during the storm to the Emergency Operations Center in the Launch Control Center at Complex 39, NASA said in a statement provided to Mashable.

“They can take any action needed to stabilize the situation and keep the facility secure,” it added.

SpaceX, which is still reeling from the September explosion at the Cape Canaveral Air Force Station, has been modifying Launch pad 39A for future flights. While no rockets are stacked for launch right now, two expensive satellites are reportedly in storage awaiting take-off.

“Once the storm has passed, center facilities and infrastructure will be assessed and employees will be cleared to return when it is safe to do so,” NASA told Mashable in a statement.

With things looking the way they are, there could be a lot to assess.