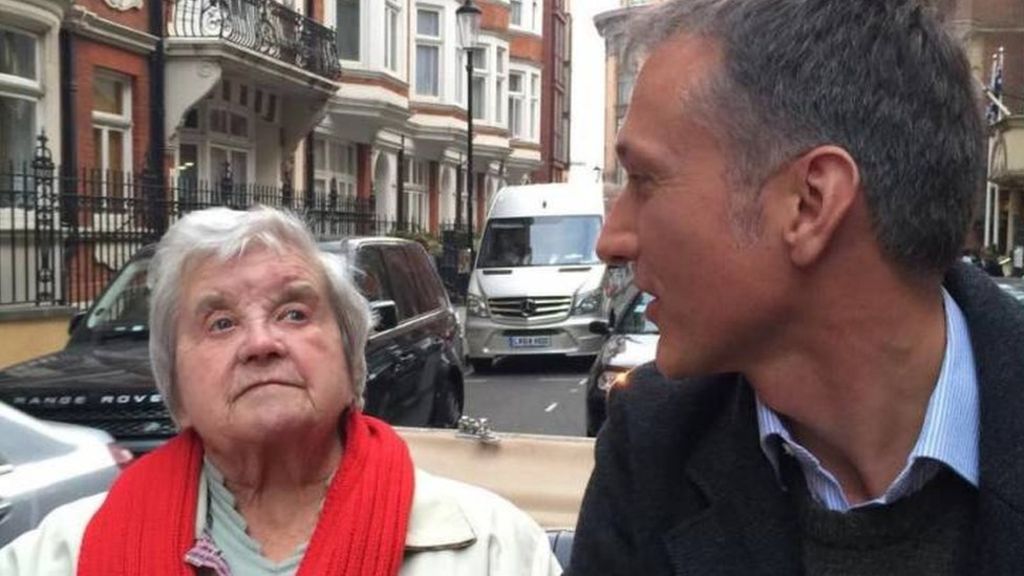 A London couple have been inundated with responses to their advert looking for help caring for their elderly grandmother in return for free accommodation in the capital.

“Granny-sitter wanted” the advert on a housing website reads. Seeking a big-hearted soul with caring experience and a musical talent to help look after Margaret, 93, who has a love of crosswords, baking and singing old drinking songs.

Ross Elder, 40, and his partner Sofie, 32, posted the unusual advert in the hope of finding someone able to grandma-sit three days a week in return for living rent-free in their swish city apartment overlooking the Thames on London’s Southbank.

“I want to spend more time with Margaret,” grandson Ross says. “We have a lot of fun and we really enjoy her company.

“She’s had a really busy and active life but two years ago she had a stroke and when we realised she couldn’t live independently any more we had to move her into a care home.”

Since then Ross has made the journey from London to the home in Staffordshire every Tuesday to visit Margaret. “They do a great job there,” he says, “but I just became struck by a sense of loneliness in her.

“The staff don’t have time to spend one-on-one with every resident and she’s not the type who would just join a group activity.

“I felt I wanted to do something more and so we decided to look at moving her in with us.”

The couple realised they would need to make some life changes in order for Margaret’s move to work. Their third-floor flat in trendy Shoreditch with no lift or accessible amenities was not an option.

“We decided to rent a place overlooking the river that was much better for nearby walks and getting around,” Ross says. “We organised some professional care as we realised it would be a challenge but I wanted someone to be with her all the time.

“She has occasional memory loss and mild dementia and she needs someone to always be around.

“I want to spend a lot of time with her but it’s during those extra few hours each week or if she gets up in the night that we know someone is flexible and can be here.”

The idea for a live-in granny-sitter came after they read about a nursing home in the Netherlands which allows university students to live rent-free alongside the elderly residents, as part of a project aimed at warding off the negative effects of aging.

In exchange for small, rent-free apartments, the Humanitas retirement home in Deventer requires students to spend at least 30 hours per month acting as “good neighbours” doing a variety of activities with the older residents, including watching sports, celebrating birthdays and offering company.

“It planted a seed in my head and we decided to put out an advert,” Ross says. “We wanted someone who would bring more life into the house and just hoped we could find someone who was looking for a place to live with some caring experience and a love for music to help keep Margaret entertained.

“We didn’t really know what to expect but we’ve been really overwhelmed with the response.”

Over 200 emails later and the couple are now holding a host of interviews.

“It wouldn’t work for everyone as they need to be flexible with their time, he says.

“We’ve had lots of musicians and actors get in touch who have periods without work and who supplement their income working part-time in bars and some people who have experience of living with a grandparent or caring for an older relative.

“We’ve even had a lot of messages just wishing us well and saying even though they could not take up the offer they would love to come and play music for Margaret in lieu of cakes she would love to bake for them.

“It has given me such faith in the kindness of people and I feel much more positive now that it could really work.”

Ross, an internet entrepreneur, says he realises he is in an unusually fortunate position.

“I sold my property website four years ago which has freed me up to only have to work part-time on my own projects. I’m in a good place financially and I have the time and resources to be able to do this.”

But he says he hopes it encourages and inspires people to think about more innovative ideas for elderly care.

“Loneliness is a huge problem and I never really realised the impact it can have. There are issues around safety to consider but young and old people cohabiting can help older people be more independent and even stay in their own homes.

“I love the idea that they can have a gossip together and offer each other so much in companionship.”