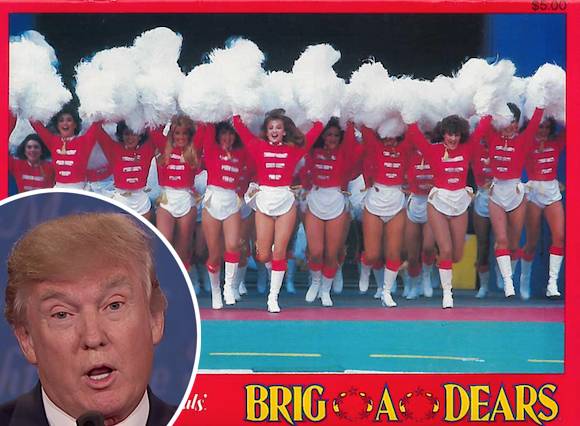 The Donald took pride in showing off his cheerleaders — the Brig-A-Dears — as though they were property, with one

Take, for example, the time that he had cheerleaders routinely going into bars in skimpy outfits to parade themselves in front of hordes of drunken men, all while the girls feared for their own safety!!!

Reported by the Associated Press on April 19, 1984, the story went something like this:

“The women said that in a meeting last Thursday with Generals’ vice president Charles Theokus and Emily Magrish, director of promotions, they were given an updated schedule that listed more tavern work, in addition to appearances at a parade and a department store. Before last week’s meeting, Madeline Coangelo, director of the squad, and Robin Hoctor Horneff, the choreographer, went to New York to talk about the cheerleaders’ gripes with the wife of team owner Donald Trump. Ms. Coangelo said she spoke instead with a Trump employee and submitted her resignation several days later. I really don’t feel that going into bars in these skimpy outfits in front of 25 drunken men is the kind of publicity we should be involved in,’ Ms. Coangelo said.”

And so it wasn’t much of a surprise when some of the girls backed out of their sleazy gig — or in the Generals’ mind, got fired for not doing their duties.

In that same AP report from April 19, 1984, the story goes about several of the women who up and left the Generals’ cheerleading squad:

“They knew the bottom line was that they were going to cheer for all nine games,’ said Kevin MacConnell, director of public relations for the United States Football League team [Generals]. It’s one of the biggest things in the contract.”They’ve been cheering at home games for three weeks,’ said MacConnell. They had some appearances already. Apparently 18 of the girls felt we are doing the right things.’ MacConnell added that the bars where the women had been scheduled to appear are reputable places.’ The bottom line is they got their grievances out,’ he said. We’ll go on with the girls we have. We will add some of the alternates (to the squad) and go from there.'”

READ  The Full House Home Can Be Yours To Rent But It Won't Come Cheap!
Powered by Inline Related Posts

Of course, it wasn’t just sleazy bars where there was a possibility for who knows what kind of sexual harassment — or even assault — it was also the unfulfilled promises and flat-out lies, something of a theme in the business life of Donald Trump.

“The pay was low, the work was hard, and the job conditions were occasionally dismal. But for many determined young women on the fringes of show business in the New York area, the positions offered the ultimate lures: glamour and the prospect of fame. And so, when the Generals held a series of auditions last December for the team’s new cheerleading corps, some 400 women showed up to compete for 30 jobs. Yesterday, after weeks of braving snowballs and insults hurled by rowdy fans, suffering through what some saw as demeaning promotional appearances and trying unsuccessfully to force the Generals to improve their lot, 11 of the 30 original cheerleaders were former cheerleaders. In an apparent effort to force the Generals to provide more – and more desirable – promotional work, the 11 women had failed to appear for Sunday’s game at Giants Stadium against the Arizona Wranglers, and as a result they were stricken from the roster.”

So in other words, despite 400 women showing up for auditions, once the team was actually picked, one-third of the women quit VERY quickly when they realized how poorly they were being treated.

What do U think, Perezcious readers?? Let us know in the comments (below)!!