British holidaymakers being flown out of The Gambia – BBC News

British holidaymakers being flown out of The Gambia – BBC News 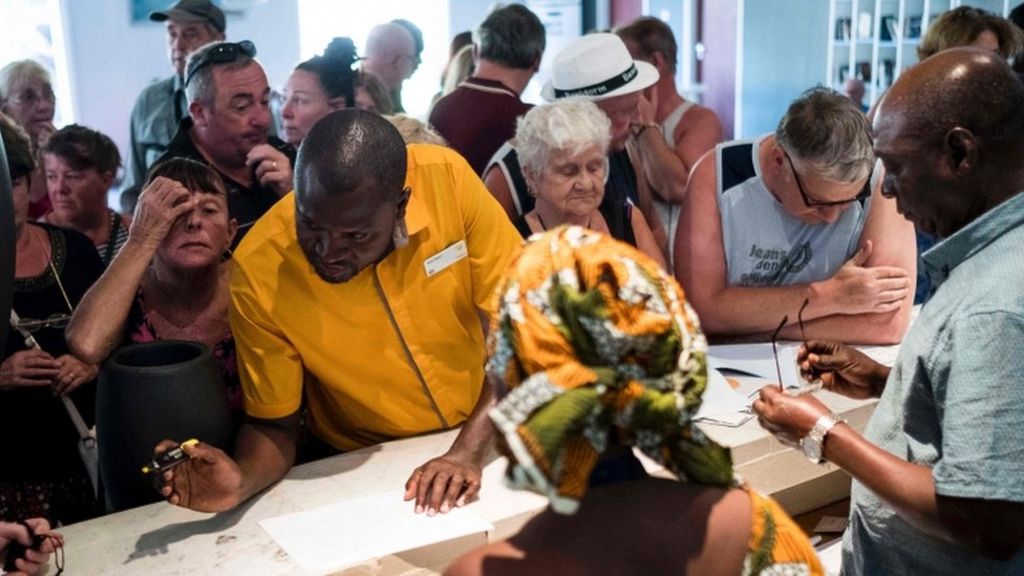 Thousands of UK tourists are being returned from The Gambia after the Foreign Office issued new travel advice amid a state of emergency.

Thomas Cook plans to bring home 985 customers from package holidays over the next 48 hours, with four extra flights due to leave on Wednesday.

Another 2,500 flight-only customers will be offered the “earliest available flight” from the west African country.

The Foreign Office now advises against all but essential travel to The Gambia.

Are you, your friends or relatives in The Gambia? Email haveyoursay@bbc.co.uk

Specialist tour operator The Gambia Experience said it was contacting its 225 package holiday customers and 109 flight-only customers in the country with a view to bringing them home.

A 90-day state of emergency has been declared and approved by Gambia’s parliament over disputed elections.

The country’s president, Yahya Jammeh, was due to finish his term on Thursday following his defeat in elections, but this has now been extended by 90 days by parliament.

What next for The Gambia?

Regional leaders have threatened to use military force to oust Mr Jammeh if he refuses to hand power to President-elect Adama Barrow on Thursday.

The international airport in the capital Banjul could be closed “at short notice”, according to the Foreign Office travel advice.

Elaine, who is in the country on holiday, told the BBC: “It’s total chaos here, even [the] rep does not know what’s going on.”

Another tourist said they had not received enough information about the situation.

One holidaymaker who was waiting at their hotel for their transport home said: “All hotel guests are to leave today, however people were still arriving here for their holiday in the last couple of days.

“We heard about the problems and contacted Thomas Cook. They said we couldn’t change our travel dates unless the government site said no travel to Gambia.”

Another told the BBC: “My mum and her husband are in Gambia and the internet is down, phones are down and there are no news channels.

“An awful situation which they would have known nothing about if I hadn’t called them.”

Thomas Cook said it expected the company’s special assistance team would arrive in The Gambia at about 13:30 GMT.

In a statement, Thomas Cook said: “We will operate a programme of additional flights into Banjul airport over the next 48 hours to bring the 985 UK customers we currently have on holiday in Gambia home, including four additional flights on Wednesday 18 January.

“In addition, we have approximately 2,500 flight-only customers in Gambia, whom we are contacting to offer the earliest possible flight availability for return to the UK.

“Our colleagues on the ground in Gambia will proactively contact all customers on holiday with us as soon as possible to prepare for return to the UK.”

Two additional flights are due to leave for Manchester, where the first flight is due to land at 18:30GMT, and two will head to London Gatwick. There is also a regularly scheduled flight to Manchester.

Abta advised British tourists on package holidays to contact their tour operator to arrange return flights, while anyone who has travelled independently should speak to their airline.

Those with future bookings should contact their travel company to discuss the options.

Mr Jammeh has decried “extraordinary” foreign interference in his country’s affairs and in December’s presidential election.

Regional leaders have been trying to persuade him to hand over power to President-elect Mr Barrow, a successful property developer who reportedly once worked as a security guard at an Argos store in north London.

Are you, your friends or relatives in The Gambia? Have you been affected? Tell us your experiences by emailing haveyoursay@bbc.co.uk

You can also contact us in the following ways:

Or use the form below