Mr. Trump, Only A Just America Will Be A Truly Great America

Mr. Trump, Only A Just America Will Be A Truly Great America 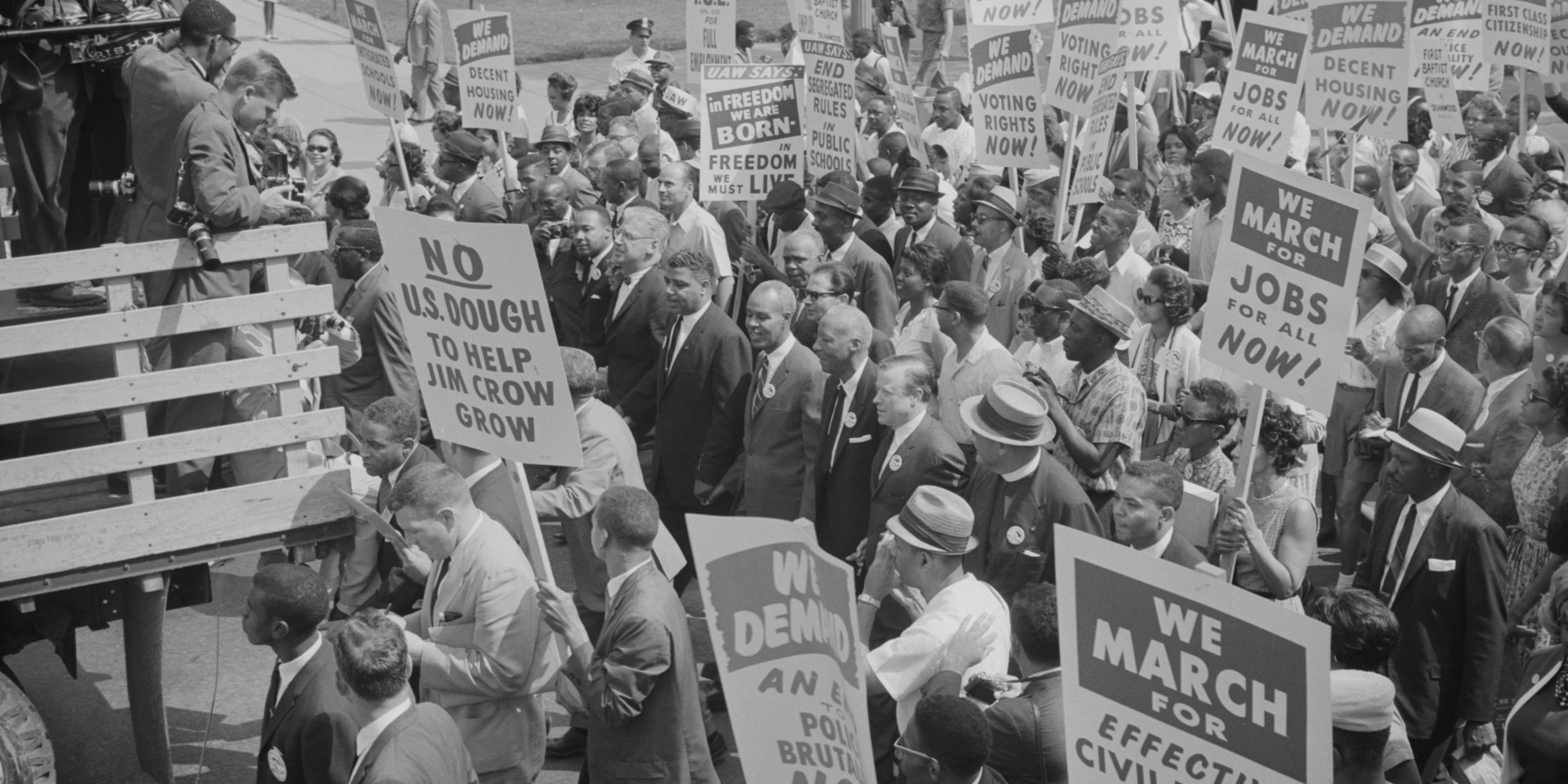 The following remarks were delivered at the historic Morris Street Baptist Church in Charleston, South Carolina on Sunday, January 15.

There have been times in our nations proud history when attacks on individual civil rights slipped by silently unmarked and unavenged.

When neighbors woke up in their small town the morning after a lynching and went about their normal business, making small talk and doing ordinary things so as not to wake the sleeping giant of justice.

And then there are other times, when the conscience of this principled nation is so disturbed, it cannot go back to sleep, when the tension in Americas soul is too great to bear.

Those are the times when there is a moment of opportunity for the civil rights movement to move forward.

Those are the times when America can reclaim her birthright and live up to her high ideals.

This is just such a time.

We are at a crossroads in Americas civil rights movement.

On our televisions and telephones, we have watched unarmed black men with their hands raised in surrender gunned down by police. Weve seen people of color shot in the back while running away. Weve seen police officers take on the role of judge, jury and executioner and pay no price for that breach of justice. And just last month, we saw a jury unable to reach a verdict even after seeing videotape of police shooting an unarmed black man who was stopped for a broken taillight.

We must all face the uncomfortable truth that it is dangerous to be black in America. Shockingly, our courts have accepted that race is relevant evidence in determining the reasonableness of using deadly force by police and by regular citizens standing their groundand defending their property against a vague threat. This systemic belief that black people are inherently dangerous has created an open season on people of color in America.

And it doesnt end with physical violence. Black people are killed again when they enter the courtroom. When innocent black defendants are forced to plead guilty to a lesser felony conviction to avoid a decade in prison, they become the walking dead, unable to get a job or vote, unable to achieve a stable income to support their children. This is the steep price they pay.

There is an unmistakable tension in Americas soul at this moment that will not go away until there is justice for all Americans regardless of the color of their skin. Tension is not a comfortable thing, but as Dr. King taught us, sometimes it is a necessary thing. He told us thatthere is a kind of constructive, nonviolent tension which is necessary for growth the kind of tension that will help men rise from the dark depths of prejudice and racism to the majestic heights of understanding and brotherhood.

And what is brotherhood? Brotherhood is the conviction that you and I are one family regardless of the color of our skin and I cannot be free while your freedoms are trampled. Brotherhood deeply understands how interconnected we are. Dr. King said, Injustice anywhere is a threat to justice everywhere. He reminded us that as brothers, We are caught in an inescapable network of mutuality tied in a single garment of destiny. Whatever affects one directly, affects all indirectly.

It was the sense of brotherhood that caused a small Bible study group at Emanuel AME Church to welcome an outsider into their midst to study Gods word with them. And after he murdered them in cold blood, hoping to provoke a race war, the citizens of Charleston, black and white, responded in unity, and clung to each other in grief. His evil action failed because it galvanized the brotherhood of black and white people of good intent, who were united in their outrage and grief.

When the families of the victims choked out expressions of forgiveness for the killer days after their loss, holding up an example of divine brotherhood, the nation watched in awe. That action said we dont get to choose who is our brother. God ordains this brotherhood of humanity and, as Jesus said about His church, the gates of hell will not prevail against it. The evils of racism and hatred will not overcome.

We are at a crossroads. As a nation, our brotherhood has never been more divided. The lines are sharp and deep: Police and citizens. Black and white. Democrats and Republicans.

Carol Moseley Braun, the first African American woman to be elected to the U.S. Senate, saidthe really important victory of the civil rights movement was that it made racism unpopular, whereas a generation ago you had to embrace racism to get elected to anything. I pray thats still true today.

Its incumbent on President-elect Trump to set the tone for this America and denounce division,racism and nativism as he becomes president of all…

And its necessary that we, as Americans, sharpen our gaze to root out racism and raise our voices in defense of justice for all.

This is not a moment for silence. Its not a moment to go about our ordinary business and look the other way. This is a moment for all Americans of good intent black and white to raise our voices and claim our God-given brotherhood.

Dr. King said, Three hundred years of humiliation, abuse and deprivation cannot be expected to find voice in a whisper. This is not a moment to whisper. At this pivotal time in American history, let us raise our voices and demand that America lives up to the high ideals on which she was founded.

Let us demand that the Constitution the document that makes this fragile experiment in democracy possible is upheld. America, these are your words. As the Constitution guarantees, let us insist on due process and equal justice for all the white skinned and the brown skinned, the privileged and the destitute, the powerful and the powerless.

Mr. Trump, in five days, you will become Americas 45th president. Your legacy is unwritten, but it will quickly take shape. You have real power and profound influence. You can use it to unify – – or to divide, to create a more just America or a place of squandered potential that falls pitifully short.

You promised to Make America Great Again. Let me suggest that the path to greatness is living up to the ideals of our Constitution.

In a truly great America, the vast majority of black men are educated and not incarcerated.

In a truly great America, the ranks of our police officers and our prosecutors reflect the diversity of our communities diversity of thought, culture and race.

In a truly great America, those with power are held accountable when they abuse it, harass a citizen or wrongfully take a life.

In a truly great America, all are innocent til proven guilty, regardless of their skin color.

And in a truly great America, justice is achieved in a courtroom not handed out on a city street.

Because, as we know, America cannot be truly great unless she also is truly just.

There is a high road forward from here. It is the way of justice And only justice leads to a lasting peace. As Dr. King reminded us, peace is not merely the absence of tension. It is the presence of justice.

Mr. President-elect, many say your election made history. Well, its not just about making history. Its about making progress… progress toward a true brotherhood of Americans…

…a brotherhood of black lives and blue lives where both police and citizen can go home to their families in safety because violence against our police is as unjust and unacceptable as violence against innocent people of color.

Technology has brought to light things that were long hidden. Injustices are captured daily on dash cams and smart phones for all the world to see.

Now, its time for moral and spiritual wisdom that keeps pace with our technological advancements.

Its time for American greatness to be founded in justice, education and economic opportunity. And its time for true brotherhood, because, as Dr. King taught us, only if we live as brothers can we avoid perishing as fools.

As we remember the Rev. Dr. Martin Luther King today, let us honor his legacy by taking up his mantle and moving America forward for the future of our children.

Let us make an America worthy of our children, an America where children of all races and incomes and creeds have an equal chance for a future and equal protection under the law.

May Gods providence continue to rain down on this great nation as it always has.

From our very start, when America was fighting for our independence, God gave us patriots like George Washington and Thomas Jefferson.

When America was in a struggle to save our national soul from the evils of slavery, God gave us a statesman for the ages in Abraham Lincoln.

And when America needed to live into its high ideals and embrace civil rights for all Americans,God gave us a man of uncommon faith…

… a man who was not afraid to go to jail for his convictions.

… a man gifted in words, who used them to lift us up and spur us on.

Now, in this most potent and precarious time, we look to God again to intervene in Americas destiny…

… to continue His divine providence.

… to infuse our national, state and community leaders with wisdom.

… and to shine a light on the role He ordains for each of us to play.

Only God can unite this broken brotherhood and strengthen us to reject the evils of hatred and division.

Only Almighty God can endow America with greatness that flows from righteousness.

Its up to each of us abandon our prejudices, acknowledge our brotherhood and accept Gods call to greatness.

Attorney Ben Crump has distinguished himself as a civil rights advocate, earning him the Henry Latimer Diversity Award, Outstanding Philanthropist of the Year, 2014 National Newspaper Publishers Association Newsmaker of the Year, and The Root 100 Top Black Influencers. Crump also has served as president of the National Bar Association and is the founder of the Ben Crump Social Justice Institute, which fosters opportunities to ensure the fair and proper administration of laws safeguard the fundamental rights of all people. The BCSJI is designed to address the social issues that disproportionately impact our most vulnerable citizens. For more information, pleasevisit www.bcsji.com.